OH, MAN. This will be messy, because I'm doing a hundred things at once.

If you have yet to see the blooper reel that the awesome team at Penguin put together (thanks, Emilie!), and if you're wondering why I rarely appear in recorded form, you should watch the above video. And then you'll understand. The voice you hear patiently (oh so patiently) prompting me in the background is my beloved agent Kate. Bless her.

Nothing scrambles my brain as efficiently as a video camera. They're probably the worst thing in the world. No! Being eaten alive by a wild animal is the worst. Being videotaped is the second worst. War is probably third. And then, like, Brazil nuts.

I'll be doing a lot of traveling in the next few weeks. First up, Madrid and Barcelona! The ones in Spain! For real!

Mi maravillosa publisher Plataforma Neo is bringing me over for the publication of Anna's translation, Un beso en París. Which is . . . incredible. If you live in España, I sincerely hope you'll be able to come. I'm excited to meet so many new readers! Here's a poster with all of the necessary info: 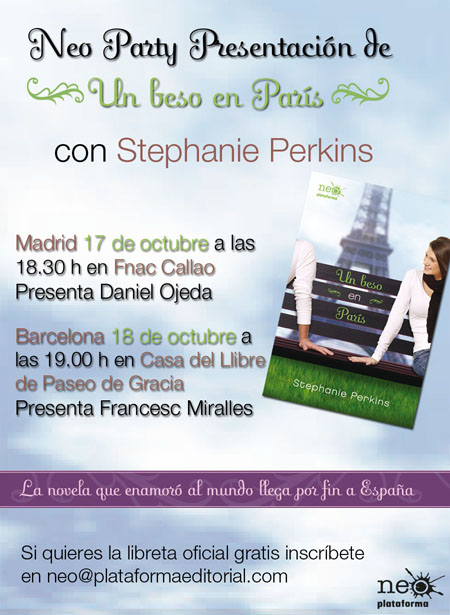 Also . . . I might as well apologize now for the extreme level of language-butchering that's headed your way. I took eight years of (Mexican) Spanish classes, and I worship the films of Pedro Almodóvar, but I'm STILL a beginner. Just like Anna. ;-)

After Spain! I will be at the following!

There will be forty-nine YA authors at this year's YallFest. Shazam! The panels haven't been announced yet, so I'm not sure when mine will be, but the full schedule will be on this page soon. I'm especially eager for Cassandra Clare and Holly Black's keynote about literary friendships. The keynote will require an additional ticket (five bucks, totally do-able), and you can purchase it here. Oh! And I did a quickie interview with the festival here.


OKAY I HAVE TO GO BACK TO WORK NOW BECAUSE DID YOU HEAR I'M LEAVING FOR SPAIN SOON???

Ohmygod. I have somuchtodo before I leave.
Posted by Stephanie Perkins @ 1:48 AM 19 comments: