GIVEAWAY: Where She Went by Gayle Forman 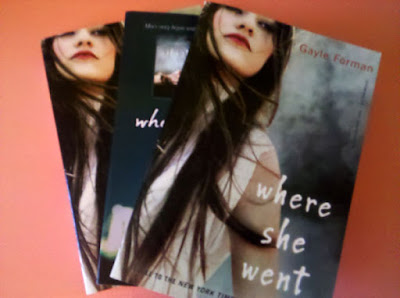 This week, I'm giving away *THREE* advanced copies of Gayle Forman's latest novel, Where She Went, which won't be released until this April. It's the sequel to the massively successful and brilliant If I Stay, and it's already been picked for this spring's Indie Next list. Here's the description:

Now living on opposite coasts, Mia is Juilliard's rising star and Adam is LA tabloid fodder, thanks to his new rock star status and celebrity girlfriend. When Adam gets stuck in New York by himself, chance brings the couple together again, for one last night. As they explore the city that has become Mia's home, Adam and Mia revisit the past and open their hearts to the future—and each other.

Told from Adam's point of view in the spare, lyrical prose that defined If I Stay, Where She Went explores the devastation of grief, the promise of hope, and the flame of rekindles romance.


I don't want to spoil it for you, so the only thing I'll say is that everything you loved about the first — the intensity, the romance, the surprise — is alive and thrashing. The sequel is just as good, if not better. Seriously.

I want these advanced copies to go to Gayle's fans. To enter to win, please leave a comment here describing what you loved about If I Stay. Obviously, if you haven't read If I Stay, DON'T READ THE COMMENTS, because they'll be filled with spoilers. (And if you haven't read it, what are you waiting for??)

EDITED TO ADD: Yes, this giveaway is open internationally.


THIS GIVEAWAY IS NOW CLOSED. THANK YOU!
Posted by Stephanie Perkins @ 1:48 PM