Ben Watson and the Return of Answers! (Part Ten: LIBRARIES) Why yes, Ben. That IS my Flux Capacitor hoodie.

This photo proves how much I really, really like Benjamin James Watson. Because I cannot help but stare at it and think:


(A) It's beyond time to re-dye my blue streaks.

(B) Why haven't made that appointment for new contacts?


But enough of my vanity. I want to talk about my friend for a moment, and how AWESOME he is. If you aren't familiar with Ben, he's the author of the hilarious picture book in my hands, The Boy Who Went Ape. (His father — the very talented Richard Jesse Watson — did the illustrations!) It's about a troublesome boy, a troublesome chimp, and a teacher named . . .

Words cannot express how much I love this name.

I recently picked this up from my library to share with Coraline, Jane, and Jayne. We were delighted to discover that it was just as warm and funny as Ben! As I checked it out, the head librarian remarked that she's read it at several storytimes, and that it always gets a GREAT response from the kids. So if any of you have little ones (or even if you don't), I hope you look for it!

Ben's blog is one of my favorites. It's on a brief hiatus, so I hope this post encourages him to return sooner. Of course, I am not just saying that because he just-so-happened to dub me:

The HBM Connoisseur and Writer of Good Words

That is PURE COINCIDENCE, you guys.

He didn't sway me to his side by complimenting me in the most generous, kind way possible or by posting pictures of my two favorite men in the universe, Jarrod and Mr. Darcy. 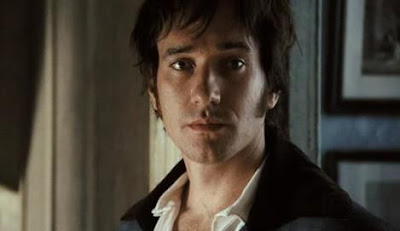 Since I mentioned his name, I'm allowed to post one. This is his, "I hope Lizzy will love me after she reads this letter" face.

Sir Ben also dubbed my pal Jim Di Bartolo The Gentle Bad-Ass Bohemian Warrior Daddy, which is pretty much the most perfect dubbing ever. Thanks for being so cool, Ben! And thank you, internet,* for introducing me to yet another wonderful friend.

So speaking of libraries, kind of, this is the perfect time to dive back into my questions. Oh! You forgot about my questions? Those things you asked me LAST JULY? Cough. Coughchokewheezehackhack.

I only have a few left, so I'll try to knock them out by the end of this month. Which means I'd better learn the art of brevity.

He's forlorn, because Lizzy is telling him she did NOT like his letter!
Natalie asked, but surely no longer remembers asking:

What was your favorite part of being a librarian?


Definitely the librarians themselves. They were the smartest, coolest, most interesting people I've ever worked with! I was very sad to say goodbye to them.

Even though, er, I still see them several times a week, now from the other side of the desk.

Librarians are unique, because they're curious about everything and, therefore, can hold intelligent conversations about any topic. They can answer any question. They keep up with current world events, national events, and local events. And for being book nerds (I'm allowed to say this, being one myself), they're oddly popular, as judged by the insane number of regulars that stop by just to chat, and by the homemade cookies and cards and flowers gifted to them every week. 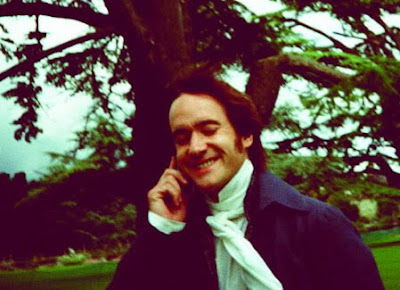 So he decides to call me! And I cheer him up, and we make plans for Friday night. What? You didn't know Mr. Darcy had a cell phone? Mr. Darcy has EVERYTHING.

Why did you decide to be a librarian (before you started writing full time)?


It was a fluke! I'd worked for several years as a bookseller, and when my husband and I moved here to North Carolina, I tried to get a job in the local bookstores first. No one was hiring, so I got stuck in a really terrible retail job elsewhere. After only two weeks, I was desperate to get out, so I checked my county's job listings. I was thinking, I dunno, secretary! Or park cleanup! ANYTHING but my horrid retail job.

But there was a page position open at the main public library (for those not in the business, the page is the person who actually works the hardest, the person who shelves all those darn books), so . . . I went for it. I was ecstatic and incredibly surprised when I got it. I'm not sure why, but it hadn't crossed my mind before then to work in a library. I suppose I thought I'd need a library science degree. (Another note: Many libraries DO require the degree, although usually not for paging.)

I worked as a page for a while, then moved into a children's librarian position, and finally ended my career as a regular librarian. The children's gig was fun, doing storytimes and ordering books and such, but a LOT of work — including work I had to take home — and it took away from my writing time. So even though my first love is children's literature, I was much happier as a just-plain-librarian.

Because that position allowed me the time to finish Anna.

And, therefore, that position allowed me to bow back out of the library. 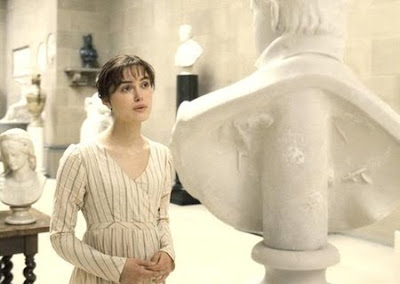 Lizzy, in GOB from Arrested Development voice: "I've made a huge mistake."

Have a fabulous day, everyone! (Why don't you visit your library?)


*For regular blog readers, the lowercase spelling indicates THE WINNER of recent my Internet/internet poll.
Posted by Stephanie Perkins @ 2:15 AM