How long does it take you to write, from idea to published novel? What happens at each stage of the process?

Anna and the English French American Boy Masterpiece started out as a NaNoWriMo project. I'd pooh-poohed NaNo for years — "How could anyone write a NOVEL in a MONTH? [obnoxious, snotty laughter]" — until I finally realized:


(A) NaNo isn't about writing a good novel. It's about starting and finishing a draft.

(B) I'd been working on the same project for four years and had yet to finish a single draft.

(C) What harm could come from only one month away from my precious novel?


If you're familiar with National Novel Writing Month, you'll know participants are encouraged to work on something new. The reason is simple: the stakes are lower. Your brain hasn't had time to build The Idea into something perfect and, therefore, unattainable.

So that meant my four-year-old project was out. And as NaNo's starting date was only two weeks away, I needed a new project SOON. 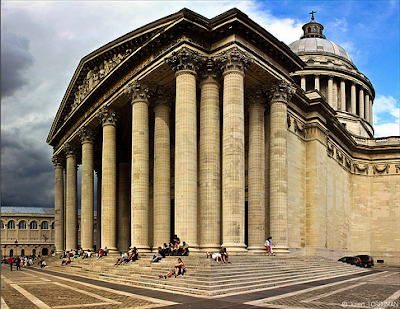 Late October 2007 — I have a dream. (Honestly.) I dream about a beautiful boy sitting on the steps of a semi-famous Parisian monument. I am in love with him. The Idea has arrived . . . and with a bang. NaNo allows you one week of preparation, so I spend the last week of October reading about Paris. By the end of the week, I still know absolutely nothing about Paris.

November 2007 — I write a really, really terrible rough draft. But it's a COMPLETE rough draft. MY FIRST. I am overjoyed. Beyond overjoyed! This is pretty much one of the greatest moments of my life. I become gloaty and unbearable for approximately one week.

December 2007 — I decide to start the next draft immediately. I work hard for THREE WHOLE DAYS . . . and then quit. A little distance is healthy, right?

January 2008 — I think I opened the document at some point, but can't swear to it. BUT I read an obscene amount about France (and will continue to do so for the next year). I also begin a friendship with a wonderful, wonderful writer named Paula, who becomes my savior.

February 2008 — I get serious about the new draft. Sort of. I work hard on the first three chapters. I write them, re-write them, and re-write them again. In other words . . . I get stuck. But I show them to Paula, and in a moment I'll be eternally grateful for, she asks for more. "More?" This concept is new to me.

March 2008 — I write more. Paula asks for more again, so I give her even more. I probably have, like, eight decent chapters now. For me, this is nothing short of a miracle. Paula convinces me that these are GOOD chapters, and that I'm ready to attend an SCBWI (Society of Children's Book Writers and Illustrators) conference. I say, "Really? Like, really really? For reals, really?" Paula remains patient with me.

April 2008 — I attend a regional conference . . . in Western Washington. No. I don't live in or near Washington state. But the lineup of speakers is irresistible. I nervously introduce myself to two Important People: my longtime dream agent Kate Schafer Testerman and fantasy writer extraordinaire Laini Taylor. They are both unbelievably cool. I pray they remember me. I tell Kate that I'm interested in querying her, and that my manuscript should be ready in early autumn. Hey! Look at that! I just gave myself a deadline.

May — July 2008 — Laini remembers me! With her endless advice and guidance via email, I work HARD. I finish my "Skeleton Draft." This is my term for a draft that's complete enough to stand on its own two legs and be recognized as a novel, though just barely. It's riddled with holes (actual, literal holes — entire chapters missing and summarized in a few sentences) and still needs all of its muscle. And a pretty face.

July — September 2008 — I finish my first official, complete draft. HUZZAH! But it's still way too embarrassing to show anyone. So I write another one.

October 2008 — I show the latest draft to Paula, Laini, and another friend (and super-reader) Sumner. They give me amazing and honest advice. I take it. Laini writes this post . . . and my entire life changes. Kate — my longtime dream agent — reads Laini's blog and emails me. SHE REMEMBERS ME. SHE REQUESTS A PARTIAL. The world explodes. I spend a frantic week (or two?) doing a quick round of revisions. I send Anna to Kate.

November 2008 — I'm a nervous wreck. Kate requests a full. OMG, MY DREAM AGENT REQUESTED A FULL. My nerves go into overdrive. I do NaNoWriMo again, because, well, it worked out pretty good for me last year. I write another terrible rough draft. This is Second Novel. Second Novel's rough draft is SO MUCH WORSE than Anna's rough draft. I'm more relieved than happy to finish it.

December 2008 — That whole nervous wreck thing? That's nothing compared to how I feel now. I'm so petrified that I'm unable to write. I take the month off. I realize I have way too much invested in Kate (even though I've tried not to feel this way, it happens anyway), so I query seven other agents in the meantime. I get a few requests for partials and several rejections. I'm no longer petrified, I am flat-out panicking. It's a Christmas miracle that my friends are still talking to me. I cry nonstop.

Early January 2009 — KATE WANTS TO REPRESENT ME! My dream agent is my real agent! I cry a lot this month too, but from pure happiness. I also call everyone I've ever met to say, "Heyguesswhat? I HAVE AN AGENT."

Mid-January — February 2009 — The partying continues. I write another draft. Once again, I call on the help of Paula, Laini, and Sumner. Often several times a day. Oh, and I quit my job at the library (!!!).

March 2009 — Kate sends Anna to two editors. I ask, "Who?" and she says one of them is Julie Strauss-Gabel, John Green's editor. I call my husband in hysterics. Never in a million years did I think JULIE would read my book. Both editors express interest. I try not to get my hopes up, which is stupid and impossible. I resume work on Second Novel, but the whole time I'm writing, I'm thinking, Holy crap. Two editors like my book.

April 2009 — I get offers from both editors. Oh. My. #$%^(*&. God. I accept a two-book deal with Dutton. I AM GOING TO WORK WITH JULIE STRAUSS-GABEL! JULIE! This is actually happening! My novel will be REAL! It'll have pages and that book-y smell and everything!

I'M GOING TO BE PUBLISHED!!!

Late April — June 2009 — I sink into one of the darkest, scariest holes of my entire life. I have to write a book. Two of them. People will read them. And I am a horrible, horrible writer. I try to work on Second Novel, but have little success. I have NO IDEA what I do during this two and a half month period. Seriously. No clue.

July 2009 — With the help of my husband and Kiersten White, I'm pulled out of the abyss. My new motto is, "Okay. You can do this. Okay. It's okay." Second Novel quadruples in size. Hallelujah chorus. A skeleton draft emerges.

August 2009 — Hi! Welcome to the present. I'm doing research right now for Second Novel, and I'm about to dig into one more serious writing session before . . .

(THIS IS THE FUTURE, AND THEREFORE, SUBJECT TO CHANGE)

September 2009 — I receive my very first editorial letter, for Anna.

November 2009 — Anna during the day, NaNoWriMo Third Novel at night.

January 2010 — Go to Paris for research. And pastries.

Summer 2010 — Summer/Fall 2011 — Work on Second Novel. Work on Third Novel. Do all of those last minute things that publishing requires. I have no idea what these things are. When I learn, I'll let you know.

Summer/Fall 2011 — Anna and the English French American Boy Masterpiece is published. My book is a BOOK. Everyone reading this blog buys a copy. Or two. And then tells all of their friends and family that they should read/purchase it.


One final note, the one thing behind every single entry: My husband, Jarrod. Who has taken care of me this entire time and never once complained. Who cooks and cleans the house and takes care of our pets. Who makes coffee and pours it down my throat. Who has pulled countless all-nighters to read countless drafts before countless deadlines.

Who never complains — and always answers seriously — when I ask if the boy is hot enough.

Books don't write themselves. They take time. And they take help.