This will be quick-ish, as I'm sleepy and anxious to hop in bed. Because bed is awesome. It's where you SLEEP and DREAM and DON'T WORK. Things like vacuuming and laundry and Second Novel are VERBOTEN in bed.


As a follow-up to my last post, Lexi asked:

what is your best pie recipe for attracting the HBMs to your house?

I assume you're recalling the strange occurrence a few months ago, in which I discovered several coded messages regarding pie underneath my weeping cherry tree. Matthew Macfadyen and Lee Pace were somehow involved, but the details remain unclear. 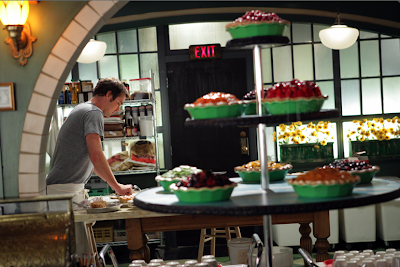 What are you up to, Pie Maker?

However, one thing was made clear that afternoon: Hot British (and non-British) Men care about pie.

So I called my HBM Celebrity Boyfriends to ask what type of pie would be the most likely to lure them to your doorstep. Here's how they responded:


CHRIS MARTIN: Chocolate! Anything chocolate! Chocolate cream, chocolate marshmallow, chocolate peanut butter. Double chocolate is always wicked . . . ooo, with one of those Oreo crusts? And served with a drizzle of hot fudge? And a glass of chocolate milk?

JIM STURGESS: Blackberry, with one of them fancy lattice tops.


Hope that helps! As for your second question:

if i traded you an ice cream, would you let me read your book? every one else is asking to read it as well, but i figure i have an edge because i have ice cream. 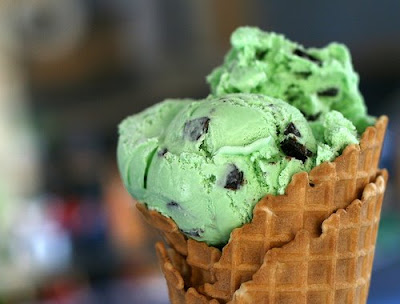 I like the way you think, Lexi. This will get you far in life.

My answer is a two-parter:

(A) Anna is on the verge of another monstrous edit, so even though I am incredibly (!!!) flattered by the interest, she's not at a stage where I'm comfortable sharing her.

(B) As soon as she is — if you're still interested — I am quite devoted to cake.

If you couldn't dye your hair blue anymore, what would be your fall back color?


Last autumn, I wanted to dye the streaks a bright yellow-gold (so my hair — combined with the natural red — would kinda/sorta look like fall leaves), but my stylist refused on the grounds that after being blue, my hair wouldn't take gold well. Something about blue and yellow being on opposite ends of the color wheel? Maybe?

Anyway, it would have turned a very NON-golden color. So I stuck with blue. There's nothing else I'd really try, because most colors would clash with the rest of my hair. I'll probably keep the blue streaks for a few more years and then return to 100% redhead.

But . . . once my hair turns gray, I'd LOVE to dye the whole thing Run Lola Run red. 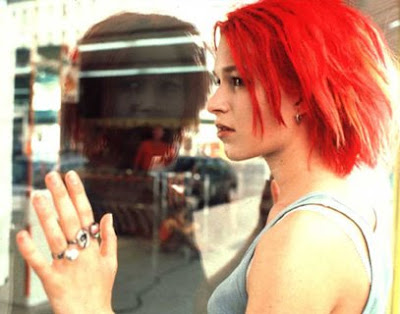 Because Lola is the coolest.

More answers on the way. Hope you all are having fabulous Tuesdays!


*For me, strawberry rhubarb. Or lemon sour cream! With whipped cream, the REAL kind, not the kind from a can. Although I'll take the can if that's all you have. You can spray it directly into my mouth. Please.