Still reeling from my SUPER FABULOUS weekend in Washington. Holy monkeys, the SCBWI conference was so much more than I could have ever dreamed! The workshops, the keynote speakers, the panels - all amazing. And the best part? Everyone I met was SO NICE. Seriously. The last time I was in a large group of writers, they were all adult novelists, and there was so much underlying tension in the room. Jealousy. Moodiness. Superiority.

It just made me love what I do that much more. It feels so RIGHT.


A few highlights of my trip:

- Feeling brave for traveling alone for the first time.

- The guys in my shuttle on the way to the hotel who had just come back from testing video games in China. How cool is that?

- Laini Taylor's workshop. My mind is still buzz buzz buzzing. Wow. It was the best workshop of the weekend, and one of the best I've ever been to. My novel will never be the same. And she and Jim Di Bartolo (her husband/illustrator) were so cheerful and kind. It would be impossible to stand next to them and NOT feel happy!

- Mo Willems. As hilarious in person as he is in his books. It was a dangerous, sharp humor that I wouldn't dare cross! His keynote address held a genuine Moment of Revelation of me.

- Crying (in the best possible way) during the Newbery and local success panels. Kirby Larson and Royce Buckingham KILLED.

- Lots and lots of coffee. I had given up caffeine for several months for health reasons, and it was almost embarrassingly wonderful to be drinking it again. And again. And again. (Even though it meant I spent about a third of the conference in the bathrooms. Whoops.)

Bellevue's library! It was only two blocks from my hotel (also fantastic), and I almost cried when I walked inside. Honestly. Tears formed in my ducts.

The building is beautiful and light and airy and three stories, and filled with round windows, comfy reading nooks, every magazine you've ever heard of (and many you've NEVER heard of), storytimes in four languages, and of course, shelves and shelves and shelves of books on every subject imaginable. With multiple copies. The young adult section alone was larger than the adult fiction section at my own library!

It was also totally clean. Bonus points are always given for cleanliness.

I wish I could live in that library.

I also wish I had brought my camera. I'm sorry there are no pictures. Just trust me - the next time you are in the Seattle area, visit the library!
Posted by Stephanie Perkins @ 7:29 PM 2 comments:

Email ThisBlogThis!Share to TwitterShare to FacebookShare to Pinterest
Labels: Travel

My Grandfather Was a Smurf

Good news, everyone. I have blue hair!

Okay. It's not ALL blue. It's streaked like my friend Tibby's hair: 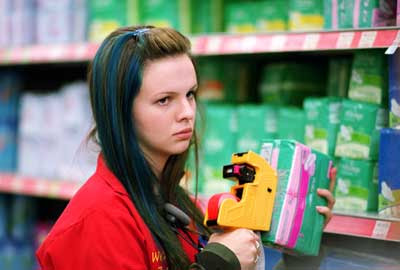 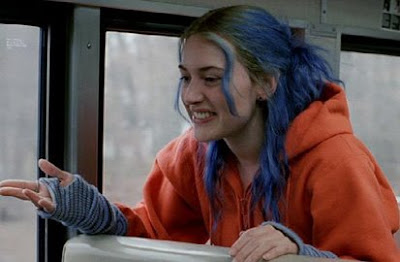 And I know I'm supposed to be an adult now, and therefore, Mature. But whatever. I HAVE BLUE HAIR! WOO HOO!!

Perhaps some back story is necessary for you to appreciate my joy.

I'm a redhead. And just like every other redhead I know, this one thing has defined my life. I'm not the tall girl or the girl with the glasses or the girl who just tripped over that box (although all three are accurate descriptions) - I am The Redhead.

Because it is. Red hair is awesome. Just as J.K. Rowling.

Anyway, the year I learned to love my hair was the same year Green Day released Dookie. Suddenly all of the girls in my school had crushes on Billie Joe and Manic Panic was the thing and my friends were bleaching their hair and dyeing it hot pink and swimming pool green and, yes, electric blue. 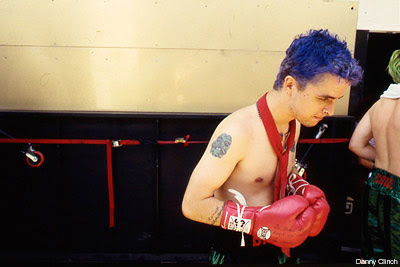 And I helped them, I LOVED to help them, but I was always afraid to reach for the bleach myself. Because I had red hair, and it was special. Right? I mean, who would I be if I weren't a redhead? And what if I were some kind of genetic freak, and my hair grew back a different color?

In other words, terror kept me a redhead.

A few years later, those mascara wands for your hair became popular. They were thick and goopy and no hair bleaching was necessary for them to show up and they washed out in a single shampooing. Oh, happy day! I had them in maroon and forest green and sparkly gold and - yes - bright blue. And the blue was my favorite, the only tube I used up. And I remember thinking, Maybe someday I will be brave enough to get the real thing.

And in the meantime, I oogled Clementine and Tibby and Ryan Phillippe's character from Playing By Heart: 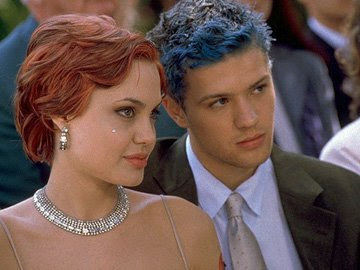 (Anyone remember that movie? Dr. Greene from ER and Jon Stewart and an undiscovered Angelina Jolie? It was pretty good when I saw it, but I have no idea what I'd think of it today.)

Only now - a decade and a half later - have I finally convinced myself of the obvious. It's just hair. And if not now, then when? I realized that if something were to happen to me tomorrow, I would be very sad if I had never had blue hair.

So I know it doesn't sound like a big deal. People dye their hair every day. And it's not like I even dyed the whole thing. I'm still 85% redhead. But to me? This is HUGE. On par with tattooing my cheekbones or piercing my elbows. Very scary and very brave and very exciting.

And I'm so proud of myself.
Posted by Stephanie Perkins @ 3:33 PM 7 comments:

Email ThisBlogThis!Share to TwitterShare to FacebookShare to Pinterest
Labels: Hair

Would you forgive me for a moment while I squeal like a fangirl?

In other excellent news, I'm going to Washington this month! I've just signed up for this. So many amazing people are going to be there - Mo Willems, Arthur Levine, Chris Crutcher, Kirby Larson, my dream agent (whose name will not be mentioned for jinxing purposes), and - oh yeah - LAINI TAYLOR. And I'm totally taking her workshop. The description:

"Laini Taylor will discuss generating ideas for a fantasy novel or series, plumbing the depths of nature and world folklore to enrich your ideas, building a world your readers will want to live in, creating characters they will want to be, and weaving it all together into an intricate and satisfying plot. And, she’ll give out buttons. And maybe candy."

For those not familiar with her work, Laini is the author of the fabulous Faeries of Dreamdark: Blackbringer. She has a lyrical way with language that makes me shiver with jealousy (in a good way), and she's created an incredible world of tattooed, devil-fighting faeries and an enchanted forest I'd give my left foot to live in. Or both my feet. And my legs. 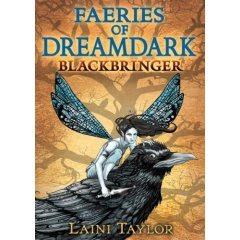 She's also the author of the most helpful, enthusiastic writing advice online, Not for Robots. And she has a wicked beautiful, sparkly, colorful house, and she is generous on her blog with pictures of it. And she has pink hair.