Tra-la-la! Here's the rest of the countdown, as promised yesterday. I'm on the edge of my seat fo' reals, yo.

Actually, not fo' reals. It's just fun to type that.

Okay, so this is one that you won't find on any critic's best list. So what? It's a great ensemble piece, and one of those stories where a bad situation gets worse and just builds and builds and builds upon itself until it can't go any further. And then it does anyway.

Jarrod and I saw this in a packed theater on a sunny afternoon with an audience that came Ready To Have A Good Time. And perhaps that's why I've got such warm and fuzzy feelings for it, but I'm telling you, that crowd totally gets my Awesome Audience award. I wish I could see EVERY comedy with them. (Hey, Death at a Funeral peeps - call me. Let's do Juno.)

So, how scary was Javier Bardem? Jeez, Louise.

Normally, I'm all about the soundtrack, but this movie was notable for its complete absence of score. Little noises off-camera (I'm thinking of a certain metallic clang on a creaky wooden floor here) were given special attention and, man, I wish more directors would work this. Up until now, I thought foreign filmmakers were the only ones willing to gamble with silence. Not so! It's worth watching this movie just to see how they pull it off.

It's no secret I'm in love with the Tim Burton/Johnny Depp film marriage. Honestly, it wasn't even remotely possible for me to NOT enjoy this movie. I'm serious. They could remake Sleepless in Seattle, and I'd be like ALL OVER IT.

Can you imagine? Helena Bonham Carter sitting around a radio, peeling an apple into one long twist, while Johnny Depp spills his weepy guts to a DJ voiced by Christopher Lee? That'd be messed up, dude. Anyway.

So. Sweeney Todd. GREAT MOVIE. Blood! Lots of blood! And questionable meat pies and Alan Rickman and goths in swimsuits! What's not to love?

And while I'm on topic, what was the deal with those people who thought Johnny wouldn't be able to carry a musical? Didn't they see Cry-Baby, the greatest John Waters film of all time? He can sing just fine, thanks.*


#6: Harry Potter and the Order of the Phoenix

Also not a surprise to those who know me. After all, Harry Potter is kind of the center of my universe. He lives in a big house in my brain called Pemberley where he and Ron and Hermione play hopscotch with Mr. Darcy and Elizabeth Bennet in the library.

I really liked this adaptation. Better than number four and SO MUCH better than numbers one and two. Alfonso Cuaron (number three) still wins the HP directing prize, but David Yates is more than welcome to keep the series going.

Order is darker and more complex than the others - as it should be - and the acting by the kids has improved. In fact, Daniel Radcliffe did a flat-out fantastic job. Yay for Harry!

It is SO not hip for me to admit how much I love this movie. (And this is coming from someone who just admitted to worshiping a boy wizard.) I mean, come on! Not a lot of indie cred when it comes to Disney.

But Amy Adams, gosh darn it, was just so adorable and cute and charming. Not many people could be this over-the-top and not make you want to barf. Who says Academy Awards should always be given to downer suicidal performances? (Ah hem, Nicole. Ah hem, Hilary.)

Enchanted was sweet and funny and the kind of perfect family film that doesn't come around nearly as often as the movie studios would like us to believe. I'm looking forward to seeing this one again.

* = Edit: He did NOT sing in Cry-Baby. Whoops. A guy named James Intveld did. This makes me sad. But weirdly enough, Johnny & James look a LOT alike. See? 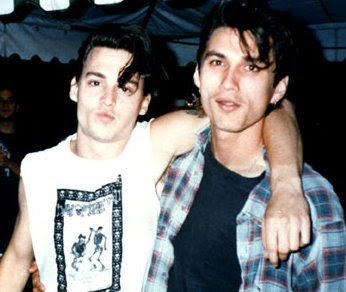 Okay. This is taking longer than anticipated.
The rest of the list tomorrow! Or the day after!
Posted by Stephanie Perkins @ 8:21 PM

Email ThisBlogThis!Share to TwitterShare to FacebookShare to Pinterest
Labels: Film